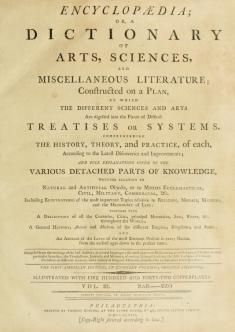 Encyclopaedia; or, a dictionary of arts, sciences, and miscellaneous literature

Constructed on a plan, by which the different sciences and arts are digested into the form of distinct treatises or systems, comprehending the history, theory, and practice, of each, according to the latest discoveries and improvements; and full explanations given of the various detached parts of knowledge, Whether relating to natural and artificial objects, or to matters ecclesiastical, civil, military, commercial, &c., including elucidations of the most important topics relative to religion, morals, manners, and the oeconomy of life; together with a description of all the countries, cities, principal mountains, seas, rivers, &c. throughout the world; a general history, ancient and modern, of the different empires, kingdoms, and states; and an account of the lives of the most eminent persons in every nation, from the earliest ages down to the present times
Compiled from the writings of the best authors, in several languages; the most approved dictionaries, as well as of general science as of its particular braches; the transactions, journals, and memoirs, of various learned societies, the ms. lectures of eminent professors on different sciences; and a variety of original materials, furnished by an extensive correspondence
The first american edition, greatly improved
DobsonPhiladelphia, Pa.1798-1803
Sprache:
englisch
Schlagwörter:
18. Jahrhundert
Anzahl der Bände:
21
Onlineausgaben:
www.nationallizenzen.de...
Einheitssachtitel:
Encyclopaedia Britannica
Paralleltitel:
Dobson's Encyclopaedia
Bandeinteilung: